Unison has been here since the very early days of the hospital which used to include the Coventry & Warwickshire site.

Some members may recall then it was called NUPE and there was also COHSE. Unison has always welcomed all members of the workforce from a diversity of backgrounds e.g.Porters, Nurses, HCA’s, ODP’s Ambulance Staff, Clerical Staff and Therapists .

We are very active on behalf of our members and put on events where we raise our profile and also reward and thank them for being with us. We recently celebrated the NHS 63rd Birthday here and at Rugby St Cross where we had special cakes made for the occasion and free gifts to give out to our members. 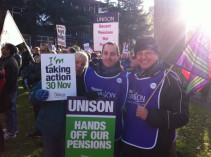 UNISON is the largest trade union in the United Kingdom with over 1.3 million members.

The union was formed in 1993 when three public sector trade unions, the National and Local Government Officers Association (NALGO), the National Union of Public Employees (NUPE) and the Confederation of Health Service Employees (COHSE) merged.

UNISON's current general secretary is Dave Prentis. He was elected on 28 February 2000 and took up the post on 1 January 2001, succeeding Rodney Bickerstaffe who had held the post for five years.

Members of UNISON are typically from industries within the public sector and generally cover both full-time and part-time support and administrative staff. The majority of people joining UNISON would be workers within areas such as local government, education, the National Health Service, police services, utilities (such as gas, electricity and water), and transport. These 'Service Groups' all have their own national and regional democratic structures within UNISON's constitution.

As a trade union, UNISON provides support to members on work related issues, including protection and representation at work, help with pay and conditions of service and legal advice. Each company or organisation will usually be represented by a particular UNISON branch and members within that organisation elect volunteer stewards to represent them. The stewards receive training in workplace issues and are then able to co-ordinate and represent members both on an individual basis and collectively.

Each branch is run by an annually elected committee of members which holds regular meetings, including an annual general meeting for all members to attend. Branches elect delegates to the union's annual National Delegate Conference (held in June every year), the supreme body within the union's constitution with responsibility for setting the union's policies for the forthcoming year.

To encourage all voices to be heard UNISON has "self organised groups" of black and minority ethnic members, women members, lesbian, gay, bisexual & transgender members, and disabled members. Young members and retired members also have their own sections within the union. 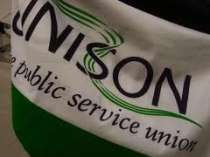 Local branches may also, after a majority vote of members, impose an additional 'Local Levy' as long as the levy does not exceed one sixth of the subscription payable. This is in addition to the standard rate, and must be used for local branch purposes.

Membership fees vary depending on how frequently members are paid and the level of their current salary (see table). Subscriptions are generally paid by what is commonly known as "check-off" or DOCAS (Deduction of Contributions at Source). This is where the employer deducts the contribution from the employee's salary on behalf of the union. Payment is taken by Direct Debit if the member joins online, if the member specifically requests it, or if there is no DOCAS arrangement with the employer.

Student members in full-time education (including student nurses or Modern Apprentices) have a fixed rate subscription of £10 per year.

Members who have had continuous membership for at least two years may opt to pay a one-off fee of £15 upon retirement from paid employment. This allows them to retain the benefits of being a union member for life. They are then classed as 'Retired Members'.

Members who are dismissed or made redundant from employment may retain their membership for £4 per year for a period of up to two years whilst they remain unemployed.